There are now more than 1,700 UNESCO designated World Heritage sites, international biosphere reserves and UNESCO-assisted global geoparks covering millions of hectares of terrestrial, freshwater, coastal, marine as well as human-influenced ecosystems such as urban and rural cultural landscapes. They attract millions of visitors annually, and the wider landscapes in which they are situated are homes to millions of people.

These places have the potential to contribute to sustainability in action in the post-2015 global development agenda, when sustainable development goals (SDGs) – due to be adopted by the United Nations in 2015 – will be the principal drivers of international development cooperation.

The conservation and sustainable development of World Heritage sites, biosphere reserves and global geoparks should address changes in human-environment relationships, not only within the sites themselves but also in the broader regional ecosystems and territories in which they are embedded.

Regular and timely acquisition of geospatial data and information is necessary for effective sustainable development and conservation planning. Near real-time acquisition of such data is now feasible thanks to satellite-, air- and ground-based sensing technologies that have advanced by leaps and bounds during the same four decades that United Nations Member States have identified and established World Heritage sites and biosphere reserves.

Sophisticated Geographical Information Systems (GIS) including participatory GIS (PGIS) approaches now enable levels of interdisciplinary collaboration never seen before – advancing our understanding of the past and enabling us to envision a future of sustainable, mixed natural and human-influenced landscapes and geographies. 3D-imaging and visioning capabilities are new tools for near-exact restoration of ancient monuments and cultural objects and for monitoring biodiversity and enhancing our understanding of geodiversity and geological hazards. Applications of space technologies also have a significant potential to contribute to the design, development and management of sustainable land/seascapes, as well as for the preservation of archaeological material in its original context.

The ‘Huangshan Dialogue on UNESCO Designated Places and Sustainable Development’  (in Chinese: 联合国教科文组织名录遗产与可持续发展黄山对话会) took place in Huangshan City, Anhui, China, from 26 to 30 May 2014, and was organized by the International Centre on Space Technologies for Natural and Cultural Heritage (HIST), the Man and the Biosphere Programme (MAB), the World Heritage Centre (WHC) and the Division of Ecological and Earth Sciences of UNESCO.  The event aimed to create a forum for experts and practitioners to share experiences and lessons in the conservation and management of UNESCO sites and UNESCO Global Geoparks, and to improve knowledge of practical achievements of the use of space technologies for the benefit of UNESCO designated places.

The participants included 170 experts and practitioners in space technologies, world heritage, biosphere reserves and Geopark policy coordination and management, as well as administrators of city and land resource agencies from twenty-three countries of the six continents of the world, gathered together in Huangshan City – home to the Huangshan World Cultural and Natural Heritage site and Global Geopark.

During the opening ceremony, Prof. Guo Huadong, Chairman of the Huangshan Dialogue and Director of HIST and RADI, stressed that the integrated applications of space- and air-borne and ground-based earth observation technologies would be essential to the study and analysis of global environmental and development challenges.

After the inaugural ceremony , the well-known IUCN world natural heritage expert, Dr. Jim Thorsell was awarded the honorary citizenship of Huangshan for his valuable contributions to the Huangshan World Heritage Site and its conservation and management.

As many as 14 keynote addresses and 24 site-specific case studies were delivered by representatives of UNESCO, HIST, RADI, IUCN, ICOMOS, the competent Chinese Ministries as well as the World Heritage sites,world biosphere reserves and global geoparks of both China and the world. All these presentations covered issues and problems linked to: policies, management, and sustainable development of UNESCO designated places and application of space technologies for their monitoring and conservation.

Focusing on all three categories of UNESCO designated and assisted places, they reviewed current policies and practices; analyzed achievements and lessons learnt from the past and on-going international cooperation initiatives to apply space technologies for planning conservation and management; reviewed a number of case studies; and then explored ways and means to build the capacities of Member States to make better use of space technologies for conservation and sustainable development.

The Closing Ceremony was chaired successfully by Mr. Hong Tianhua, Executive Deputy Director of HIST. Before the ceremony, UNESCO representative Mr. Han Qunli led a detailed discussion on the drafting of “Huangshan Declaration” which lasted for more than two hours and was finally adopted unanimously with a big applause. Mr. N. Ishwaran briefed the Dialogue participants on follow-up actions.

The outcome of the meeting was the ‘Huangshan Declaration on UNESCO Sites, Sustainable Development and the Role of Space Technologies’ (in Chinese: 《联合国教科文组织名录遗产、可持续发展与空间技术应用黄山宣言》, 简称《黄山宣言》). The Declaration recognizes, among other issues, the potential for world heritage sites, biosphere reserves and Geoparks to serve as learning sites for context-specific sustainable development strategies and actions that conserve natural and cultural heritage, enhance the socio-economic well-being of local communities, and promote international cooperation for transferring technologies and sharing experiences and lessons learnt. It also underscores the importance of building strong relationships between the site managers of UNESCO designated and assisted places, and space technology administrators, researchers and practitioners, in order to address concrete conservation and sustainable development problems and facilitate the search for solutions.

Put together a publication synthesizing the important findings and lessons coming from all the keynotes and study presentations made at the Huangshan Dialogue to be distributed at the 6th World Parks Congress due to be convened from 12 to 20 November 2014 in Australia.

Collaborate with UNESCO Division of Ecological and Earth Sciences and SCOPE (Scientific Committee on Problems of the Environment) to produce a Policy Brief on Space Technologies for Sustainable Development using case studies and examples from World Heritage sites, biosphere reserves and geoparks.

The 2nd Huangshan Dialogue on UNESCO Sites and Sustainable Development was held at China’s Mount Huangshan from 12-14 September, 2016. More than 200 experts and scholars from 37 international organizations including the International Union for Conservation of Nature (IUCN) and the International Council on Monuments and Sites (ICOMOS), and representatives from 27 UNESCO sites gathered to discuss how space technologies enable UNESCO sites to mitigate and adapt to climate change.

The event was organized by the International Centre on Space Technologies for Natural and Cultural Heritage (HIST), the Institute of Remote Sensing and Digital Earth (RADI) under the Chinese Academy of Sciences (CAS), and supported by the Mount Huangshan Administrative Committee.

The UNESCO sites consist of world heritage sites, biosphere reserves and UNESCO Global Geoparks. Among over 1,800 UNESCO sites around the world, more than 100 sites are located in China and the number will continue to grow.

During the opening ceremony, Prof. GUO Huadong, Director of HIST and co-chair of the Dialogue, reviewed the important role of space technologies in fulfilling the SDGs and in combating climate change. In the following keynote speech session, he introduced the Digital Belt and Road (DBAR), a ten-year initiative for promoting cooperation with countries along the Belt and Road to advocate and demonstrate the applications of big Earth data in support of the sustainable development of people and economies at local, national and regional levels. He also illustrated the relationship between DBAR and UNESCO sites, emphasizing that the UNESCO sites along the Belt and Road could be “part of DBAR and contribute to promoting international cooperation between China and partner nations”.

CAO Jinghua, Director of the CAS Bureau of International Cooperation pointed out in his address that adapting to climate change is a common challenge for human society. He underscored that the Dialogue provides an excellent platform for policy-makers, managers, scientists and practitioners to share their experiences in conserving and managing UNESCO sites. He also spoke highly of the achievements of HIST in the past five years and confirmed that CAS will continue to provide strong support to HIST in the future.

The three-day Dialogue included seven keynote reports, two panel discussions and 40 oral reports. Discussions focused on how the impacts of climate change on UNESCO sites interact with other factors, and on the use of space-based technologies and other approaches to understand the related dynamics.

The 2nd Huangshan Dialogue builds on the resounding success of the first, convened in 2014. The theme of the first Dialogue was “Application of Space Technologies for World Heritage Sites, World Biosphere Reserves and Global Geoparks”.

Established in July 2011, HIST is a category-II center under the auspices of UNESCO and hosted by RADI. This is the first UNESCO center applying space technologies to monitoring and conserving world natural and cultural heritage sites. 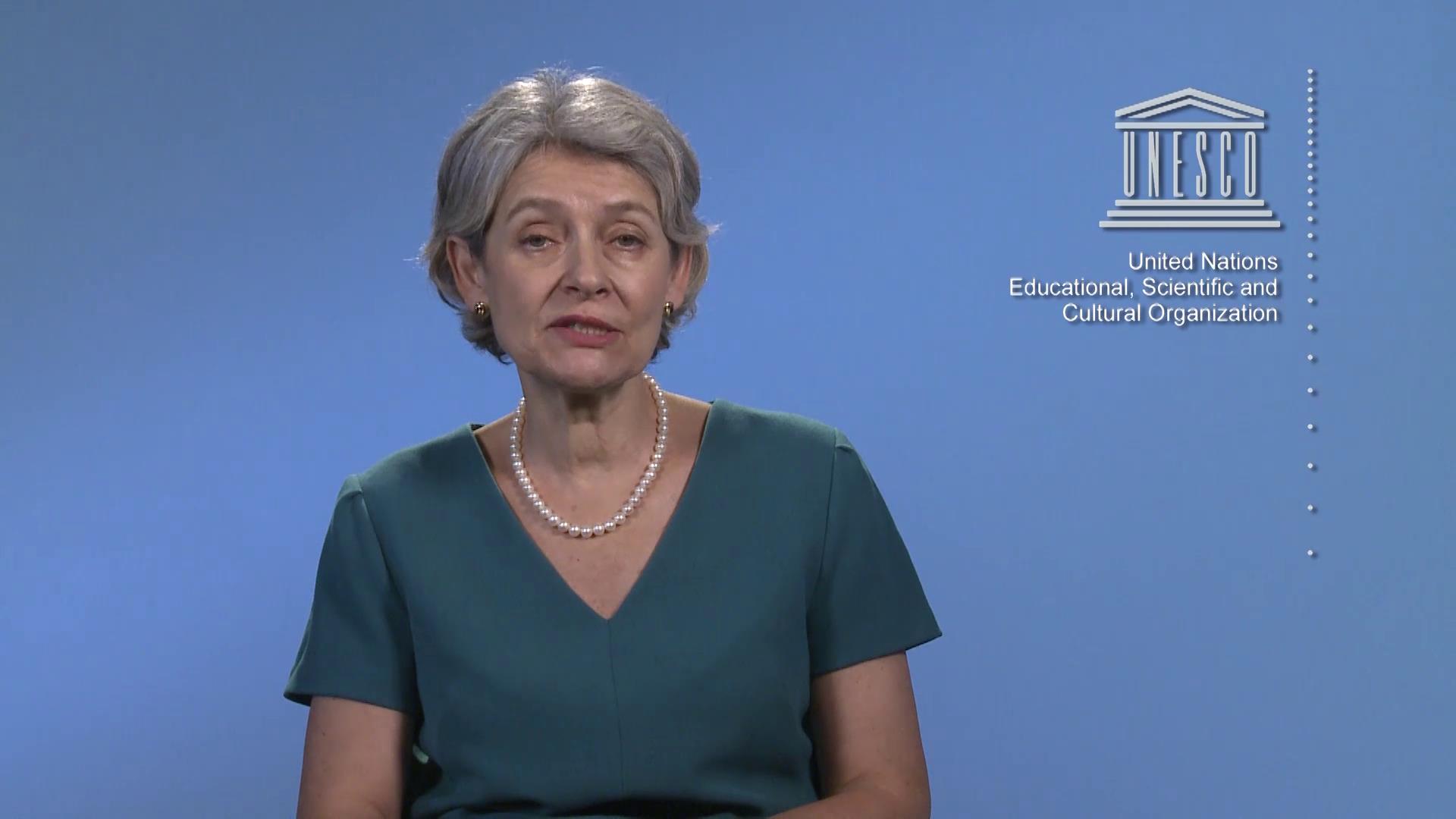 UNESCO Director-General Irina Bokova addresses the Dialogue  via a video. 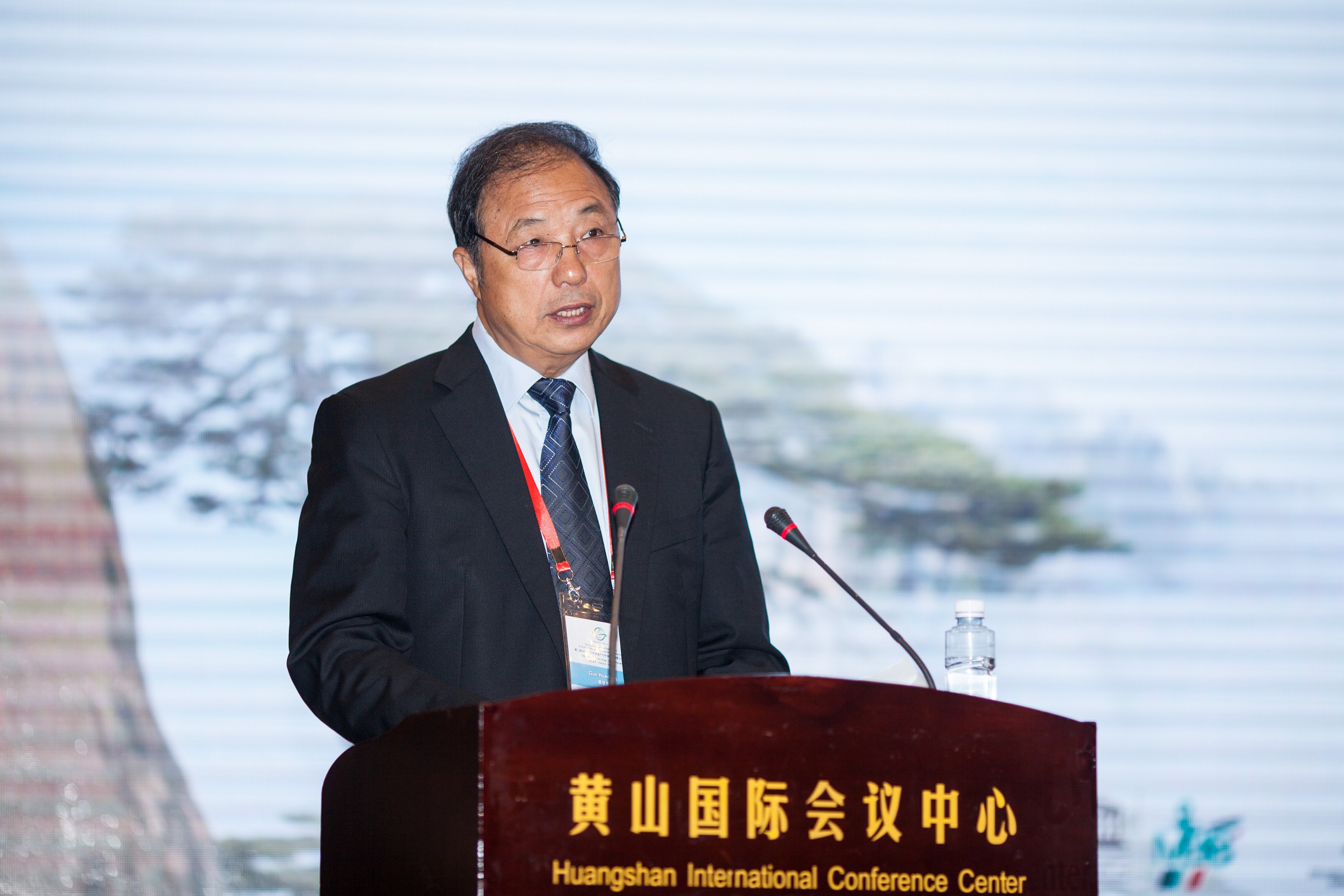